There were celebrations all round at Thirteen’s Bramley Court sheltered housing scheme in Hartlepool recently. 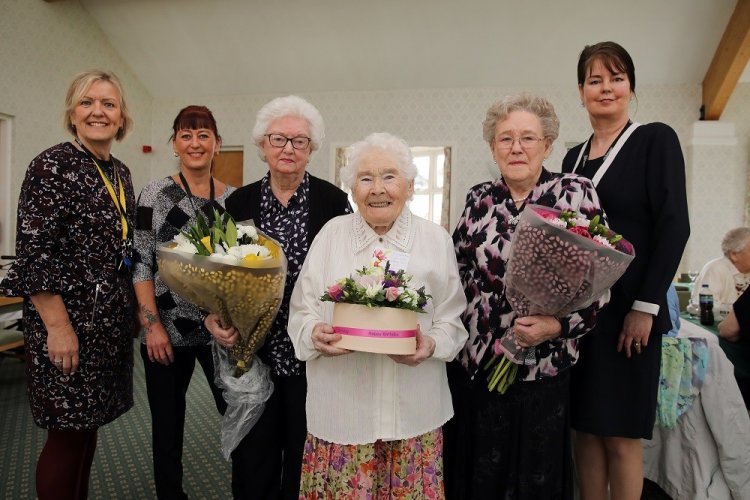 One resident celebrated her 100th birthday while Bramley Court held a party to mark 25 years since it opened.

Elsie Grint was born on 2 June 1918 and has been living at Thirteen’s Bramley Court for 14 years. A special double birthday party was held to celebrate her landmark birthday as well as Bramley Court’s quarter century of operation.

Elsie, who used to live on Waverley Terrace in Hartlepool, joined in the festivities with other residents including Lillian Coleman, Bramley Court’s longest resident.

Looking back on her life, Elsie said: “I think the secret to a long life is keeping going, working hard and helping other people. I’ve led a busy and colourful life in a lot of ways and I still try to keep myself active even today.

“I do something every day like playing bowls, going to the bingo and doing exercise classes and I can prove I’m fitter than people 30 years younger than me by still being able to touch my toes!”

She added: “It’s nice living at Bramley Court as I have a lovely garden to look at and the people are very, very friendly. One of the highlights of living here is the people and we’re well looked after.”

Elsie retired from work as a nurse but carried on volunteering with the Red Cross who presented her with Honourary Life Membership in the 1990s.

She also rubbed shoulders with royalty as she met Princess Diana and the Duchess of Kent as a result her work as a Red Cross nurse. She has also recently been given permission to continue driving as she has had her driving licence extended for another three years.

Elsie is currently also involved with Thirteen as a member of the housing provider’s service and satisfaction customer panel, and has represented Thirteen’s customers on other panels and projects in the past.

Bramley Court was opened by the Queen on 18 May 1993 and offers accommodation for older people in 43 independent living flats and two full disabled adapted properties.

Residents benefit from safe and secure housing, and care and assistance from an on-site housing support co-ordinator whenever they need it. They also have access to a 24/7 assistive technology alarm system and can use communal facilities such as lounges and gardens to get involved in a range of social activities.

Michelle Summersgill, Housing Support Team Leader at Thirteen, said: “It was great to see so many people celebrating both Bramley Court’s and Elsie’s birthday. Along with the other residents, I know that Elsie enjoys her time here and it was great to see everybody enjoying themselves at the party for such landmark birthdays.”