Nine unemployed people from across Middlesbrough have secured the chance to grow their careers with one of the North East’s biggest housing providers. 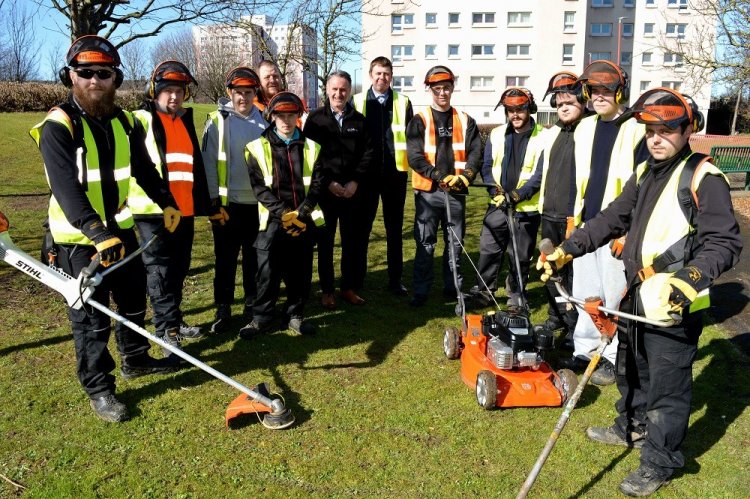 All nine have been appointed as Grounds Maintenance Technicians at Thirteen to work in the areas surrounding Thirteen’s properties across Teesside and beyond.

The new team started work at the beginning of April, just in time to deliver Thirteen’s summer maintenance programme of grass-cutting, strimming, tidying and minor repairs to the grounds of properties in the area.

The team secured their roles after working with Thirteen’s New Directions programme, whose aim is to find jobs, training and apprenticeships for unemployed people aged 15 to 29.

Staff at New Directions identified and screened suitable candidates, then ran a series of workshops to help them with application forms and interview skills. Staff then supported the candidates on a two-week work trial at Thirteen.

Lee Bates, one of the new Grounds Maintenance Technicians, was told about the New Directions scheme by his girlfriend who also works at Thirteen.

Lee said: “I’d been working on seasonal contracts for other organisations over the past few years, but had been unemployed for a little while. My girlfriend told me about New Directions so I signed up for the scheme and got through to the grounds maintenance job trial.

“A lot of schemes like this tend to focus on younger people, so I was impressed that this programme allowed someone a little older to get involved. The trial gave me a good understanding of Thirteen and I’m really looking forward to getting down to work.”

Gary Keen, Training Co-ordinator with New Directions, said: “Throughout the whole recruitment process, the candidates were assessed on their skills and behaviours for the role.

“At the end of the two-week work trial, 11 candidates were successful and offered interviews, with nine candidates being offered jobs. We continued to work with the other two candidates and one of them has already been offered another job with a construction company, so this project has had a really positive outcome.”

Paul Stephens, Thirteen’s Ground Maintenance Manager, said: “I’m really pleased that we’ve been able to identify some great people to work with us and develop their skills over the summer season.

“Many of our staff from previous years have used their experience with us to secure permanent jobs with both Thirteen and other organisations. So as well as providing a first-class grounds maintenance service to our customers, I’m hopeful that working with New Directions and Thirteen will help to provide long-term employment for every member of the team in future.”