An internationally renowned folk singer played a one-off concert for the people of Port Clarence in Billingham to officially hand over a song she has written especially for the community. 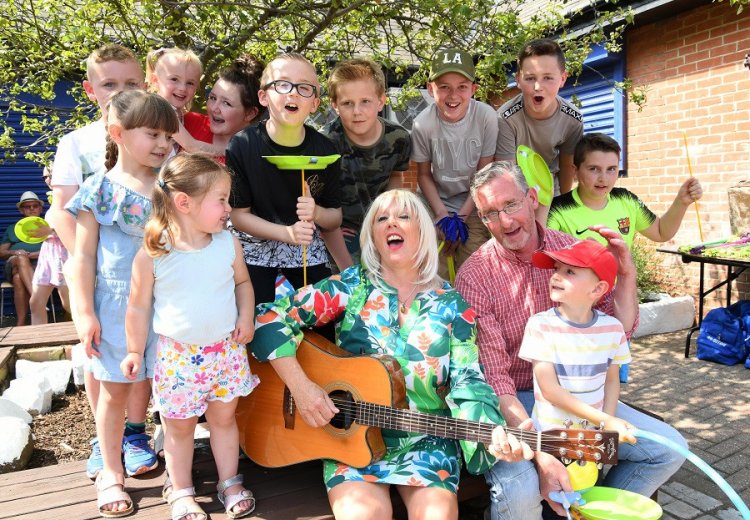 Claire Hamill was born and raised in the area and went on to become a successful singer-songwriter, touring America and releasing 11 albums. Throughout a career spanning over 40 years, she has worked with artists such as Procol Harum, Jethro Tull and John Martyn.

Called Made of Girders, Claire’s song evokes the area’s industrial heritage and the impact that the workers of the region had on constructing major buildings and landmarks across the world.

Housing company Thirteen supported Claire to present the song at a special concert in Port Clarence.

In the run-up to the concert, Claire spent time with pupils at High Clarence School to teach them the song and they joined Claire on-stage to sing for other members of the community at the concert.

As well as live music, residents came together to enjoy free food and celebrate the work that has been going on in the community since the beginning of the year.

It’s hoped that the children will adopt the song as their own and use it as an anthem for Port Clarence in the future.

Claire said: “I am delighted to be involved in this wonderful project. I am very proud of my family’s ties to ‘The Port.’

“It will always occupy a special place in my heart.”

In July, the children will be singing the song to judges from Northumbria in Bloom who will be visiting to assess Port Clarence’s entry into the competition.

Thirteen is working with local people, the Billingham Environmental Link Programme and Stockton-on-Tees Borough Council to get the area ready for judging, which has included litter picks, cleaning and painting railings and making improvements at the Clarences community hub.

Chris Smith, executive director of service delivery and development at Thirteen, said: “It’s a real coup to have a musician of Claire’s calibre writing a song specially for Port Clarence. It’s great to see someone like Claire return to her hometown to be part of the celebrations and Thirteen is really pleased to support the concert at the community hub.

“This is all part of a wider programme of work in the area where our neighbourhood co-ordinators, grounds and facilities staff are working with partners to help the area to develop. We’ve been doing a lot of work in preparation for the Northumbria in Bloom judging, so we have our fingers crossed that we’ll see a good result from the competition.”

Mrs Jean Orridge, headteacher from High Clarence School, said: “This has been a fantastic opportunity for the children to be involved with somebody who has a past link with The Clarences.

“It has helped to enrich our curriculum and to ensure that the children know the history of their community and have pride in it.”