People in Stockton’s Port Clarence are celebrating after winning an award in this year’s Northumbria in Bloom competition. 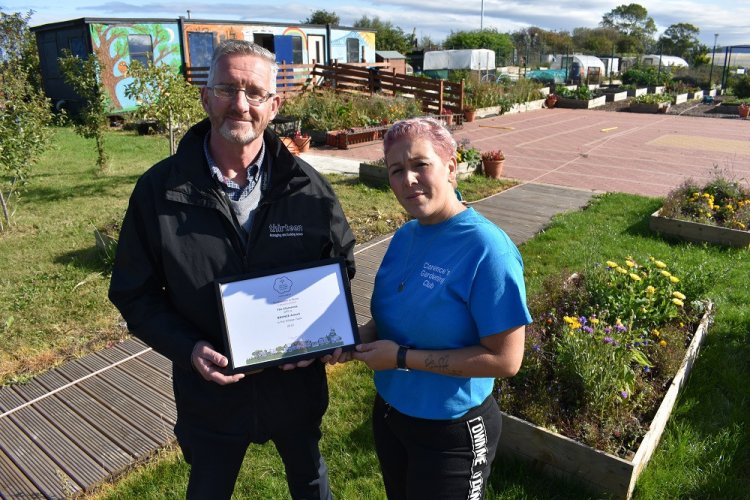 After lots of hard work from members of the local community and partner organisations over the past year, judges visited the area in July and awarded the Clarences bronze in the village class of the competition.

Following a good spring clean at the end of May, Thirteen worked with local people, the Billingham Environmental Link Programme (BELP) and other organisations to help get the area looking its best over the summer months.

This included wildflower planting resulting in spectacular floral displays, planters and hanging baskets throughout the village, a further development of the community gardens and the installation of new artwork on bus shelters and buildings along Port Clarence Road.

John said: “As well as our drive to make the Clarences a more attractive place to live, one of the major ambitions of this project was to bring the community together and work towards a common goal.

“Over the past few months we’ve had all sorts of events and activities where residents have come out and got really involved. In fact, we received a very high mark from the judges for our success in bringing the community together, so that’s something I was really happy with.

“It’s also great to see people who aren’t working on the project taking pride in the things we’ve done and having respect for the planting and public art, which is really positive for the future. This bronze award is just a demonstration of what can be achieved in a fairly short time if people all work together, and we’ve got some interesting plans to develop the area even further.”

As well as the environmental work in the area, a concert was held to mark the judging of the Northumbria in Bloom competition at the Clarences Resource Centre. Internationally renowned folk singer Claire Hamill came along to teach her specially written song to pupils at High Clarence school and perform it for local people,

Leanne Johnson-McCabe, from the Clarences Community Gardening Club, said: “To get a bronze award after entering the competition for the first time is a good achievement. It’s nice recognition for the hours of work that went into the area and it’s a positive thing for all the community.

“Since people in the community have seen big changes, more residents have approached John with ideas to make improvements in their area of the village and we’ve got a range of recommendations from the judges to get us to the next level. So, we’re looking at loads of other things like bulb and tree planting, more artwork, a herb garden and water capture systems for the community garden, so hopefully we’ll get an even better award next year.”